Living with the Tesla Powerwall for a year: the first Australian case study

Savings in excess of 90% have been reported by the first Australian to install a Tesla Powerwall after a year of living with the solar system. And with rapid advancements making home batteries more affordable, the number of installations are expected to triple in 2017.

Nick Pfitzner and his family live in a four bedroom home in Kellyville Ridge, NSW. It’s a large place with a study, an internal laundry, a pool and an outdoor entertainment area.

Powering the home with electricity in 2015 cost him $2289. But just over a year ago, he invested in a solar power system that has since significantly cut costs.

Nick, a self-confessed Tesla fanboy, was the first person in Australia to buy the company’s Powerwall. He bought a 7kW battery, a 5kWp solar array, a SolarEdge inverter and a Reposit monitoring system for $16,790 in January 2015.

The savings exceeded projections, as well as Nick’s own expectations.

“Before I crunched the numbers I was looking at what would be my return on investment. If it saved me 80% of my power bill, [I thought] it would be pretty good,” he says.

“I really learned a lot about myself and how my house uses energy and how we can improve with solar now.”

Home batteries are an emerging technology. They gained a lot of attention when electric carmaker Tesla entered the market. Original projections estimated a payback time of more than a decade, anywhere from 14 to 18 years.

At this rate, Nick’s solar system will pay itself off within eight years.

One of his quarterly bills was in credit of $50. This is because his system can sell unused electricity back to the grid.

“The system will power whatever the house needs first as a priority, then it will fill the battery as a second priority and then anything over it’ll export,” he tells CHOICE. 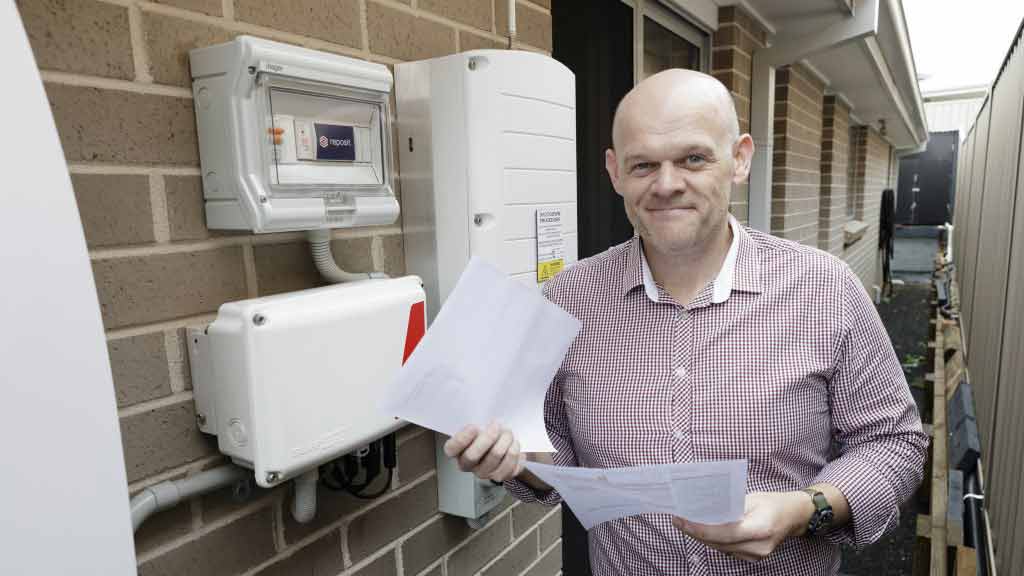 “So when we had that really hot weather last week, what happened is, there’s a peak event on the network and [electricity companies] asked batteries to start dispatching power, so it’s kind of like a little power station if you like.”

The Reposit system is one reason why Nick could end up paying his system off much earlier than projected. Another has to do with the capacity of his solar array, which at 5kW, is larger than the 4kW arrays used for modelling.

Then there’s the price he paid - $15,990 without the Reposit add-on - which was cheaper than the systems using the smaller 4kW array.

But these reasons are of little consequence to people interested in buying a home battery today, as the market undergoes drastic changes.

More than 6500 Australian households installed a solar battery in 2016 - a 13-time increase on the year before.

The growth spurt is owed to a number of factors, including steep price drops, increased competition and an appetite for cheaper electricity bills, says Warwick Johnston, the founder of SunWiz, the first consultancy firm to audit the home battery market in Australia.

“Part of [the growth] was the significant reduction in prices that occurred, particularly mid way through the year.

“I’d say battery prices practically halved. In conservative figures it was at least a 40% drop in the last year.”

Another driving factor is owed to increased competition in the industry. There were only a handful of home battery manufacturers in 2015, but Johntson estimates the number has shot up to 20 home battery brands offering 90 different models.

This has been made possible by an increase in the mining and manufacturing of lithium-ion batteries. The Tesla Gigafactory, for instance, is anticipated to produce more lithium ion batteries in 2018 than the world managed to produce in all of 2013.

The increase in supply and competition will cause prices to keep dropping, says Johnston, though not by as much.

“There won’t be steep price drops in 2017. You won’t see halving occurring.

“You could see a 10% to 20% price reduction this year,” Johnston tells CHOICE

Rather, the capacities of batteries could change. Tesla’s second generation Powerwall, for instance, doubled its capacity even though it will sell for the same price.

Warwick credits the Tesla Powerwall for creating an awareness of home batteries, but does not believe it is unique in its offering.

“It is at the forefront of many people’s minds because of that brand positioning. A lot of people look at what else is available and identify there are other products out there that have more favourable advantages than Tesla.”

As for paying a solar system off within ten years, that’ll come down to each individual case, he says.

“When you’re buying a new solar array alongside your battery system, then you can get a 10 year payback. If you have above average electricity consumption, you can do it.

“But if you want to retrofit a battery to an existing array, then you’re unlikely to get a ten year payback on just the battery alone.”

It would seem my latest book, I Quit Sugar: SIMPLICIOUS, is a little contentious. The fact I …

15 (more) clever ways to use your leftovers (Sarah Wilson)

Daily bread: the local artisan bakers nourishing us from the inside