Combining home solar, batteries and EVs will be better deal than solar alone by 2024

A new report from the Institute for Energy Economics and Financial Analysis has found that by as early as 2024, it will be cheaper Australian households to invest in solar, storage and an electric vehicle in combination, than in a solar system alone.

The report, “Steering by the Southern Sun”, investigates the apparently enormous potential for Australia to capitalise on its exceptional solar resource and rooftop PV uptake to drive what has been slow growth in electric vehicles.

It notes that while millions of Australian households have invested in some 10GW of rooftop solar, and tens of thousands are starting to take up battery storage, the shift to EVs in Australia has lagged well behind other parts of the world.

This is a great shame for Australia’s progress on emissions reduction targets, of course, but according to the IEEFA team behind the report, published on Thursday, it is a massive missed opportunity to capitalise of the “synergistic nature” of these emerging low-carbon technologies.

Or, as the other half of the report’s title puts it, Australians “are missing a trick” on electric vehicles fuelled by cheap, self-generated solar power.

Factoring in decreases in battery prices and various state government incentives for home storage, IEEFA estimates the payback period for solar plus battery plus electric vehicle, today, at 8.6 years, down to 4.1 years in 2025, and under 2 years in 2030. And that’s without EV incentives. 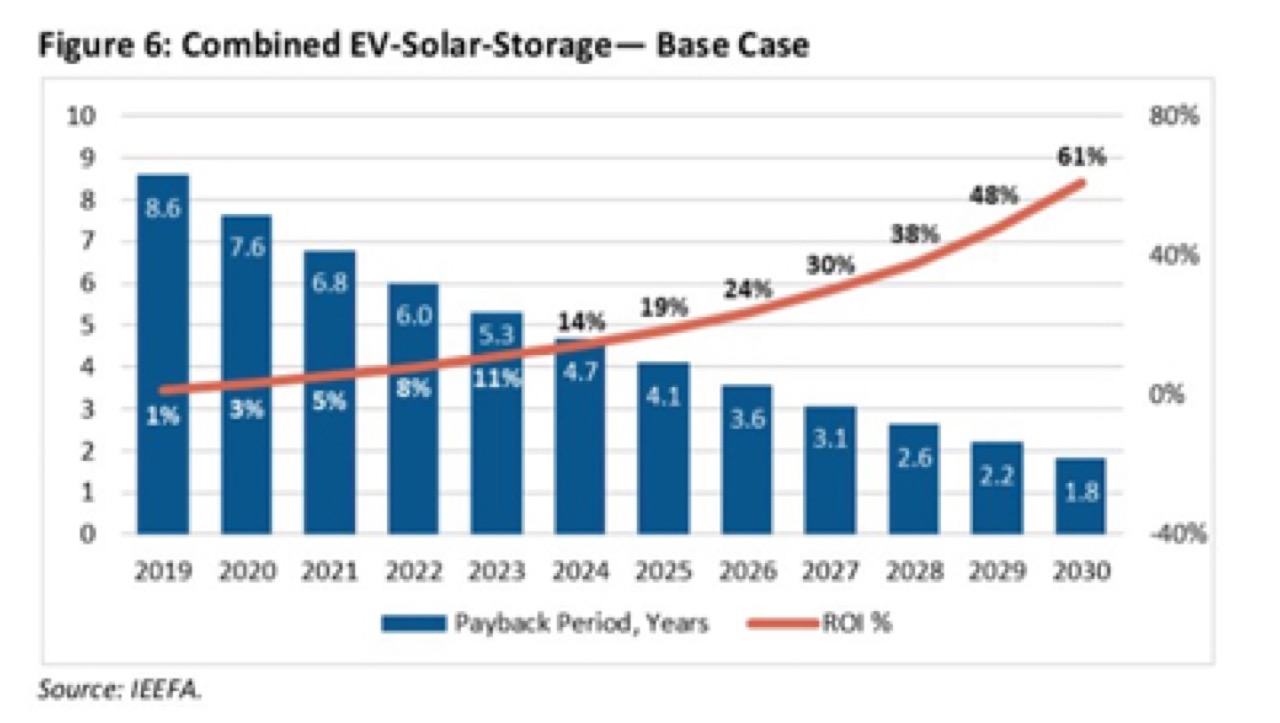 With a “modest” suite of EV incentives, which the report notes are being used with great success in various countries, but particularly in Norway, the payback for solar+battery+EV falls to just five years today, and then zero by 2030. 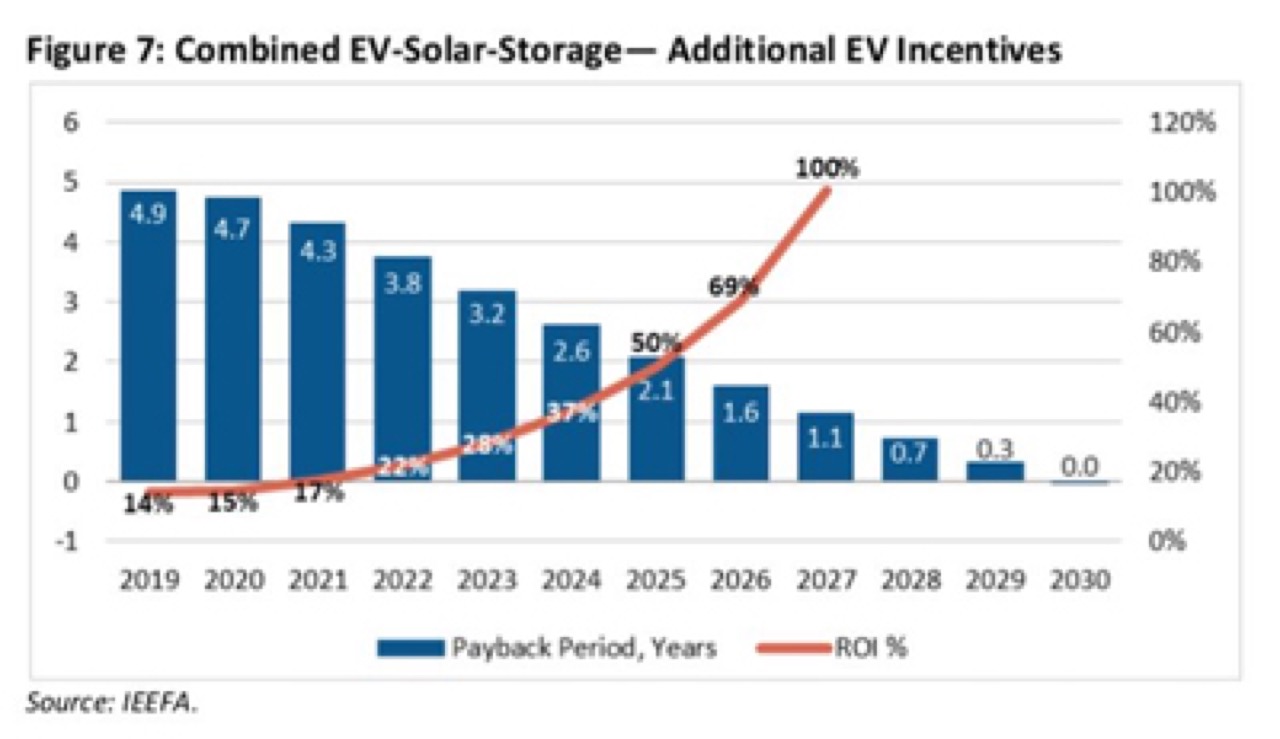 This would be achieved, IEEFA says, simply through the savings generated by on-site power generation and from avoiding the cost of buying and fuelling a conventional car. But of course the rate of saving would depend on the availability of policy incentives.

The kind of incentives modelled in IEEFA’s “accelerated” EV scenario include tax exemptions from GST (10%), import tariffs (5%) and motor vehicle tax, which in NSW amounts to $A236 a year; provision of capital grants towards EV purchase; and other “softer” incentives, such as free public parking. 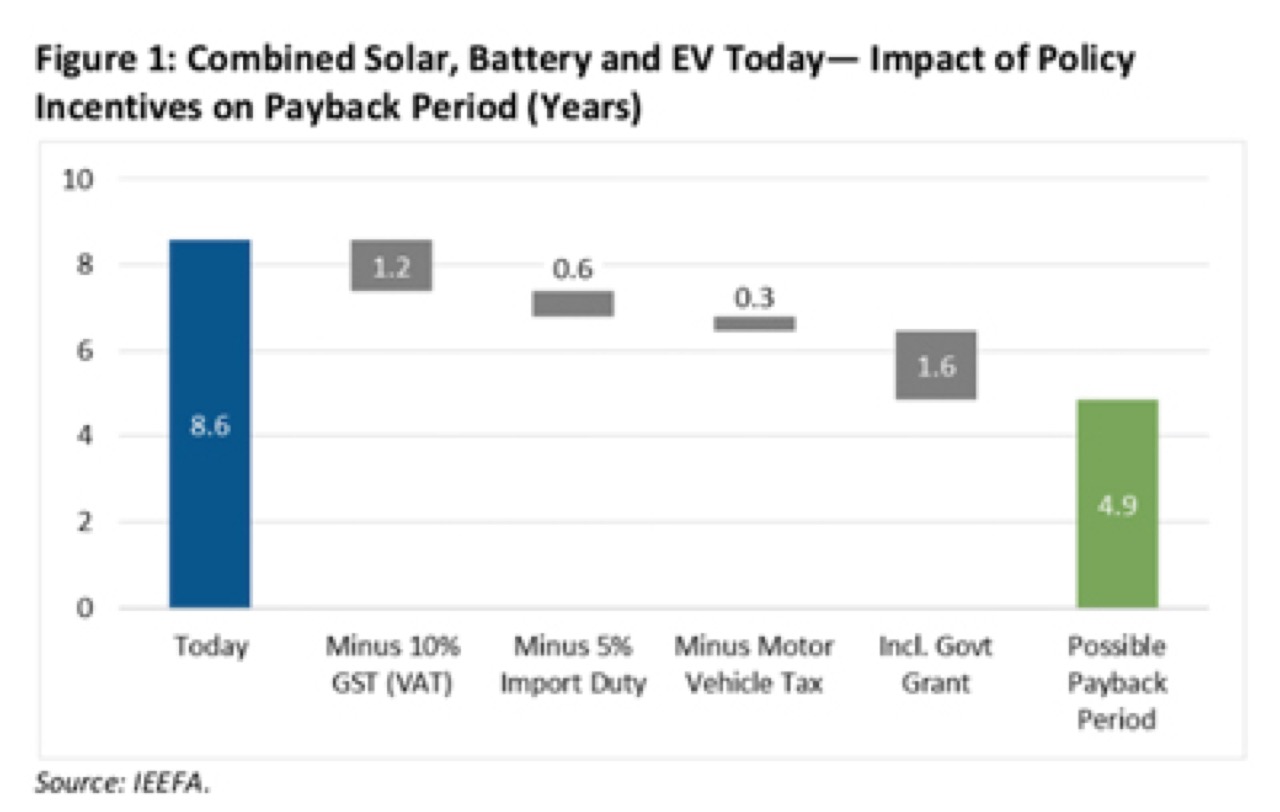 “Applying these combined incentives, the payback period on solar plus battery plus EV falls dramatically,” the report says, to the point that “by 2024, it is cheaper for a household to invest in solar, storage and an EV in combination, than in a solar system alone.”

As for the solar and battery systems used in the modelling, IEEFA ran figures on two different sizes of each: rooftop PV at 4kW and 8kW and; home battery storage at 8kWh and 14kWh. You can see how these combinations varied in figure 5, below. 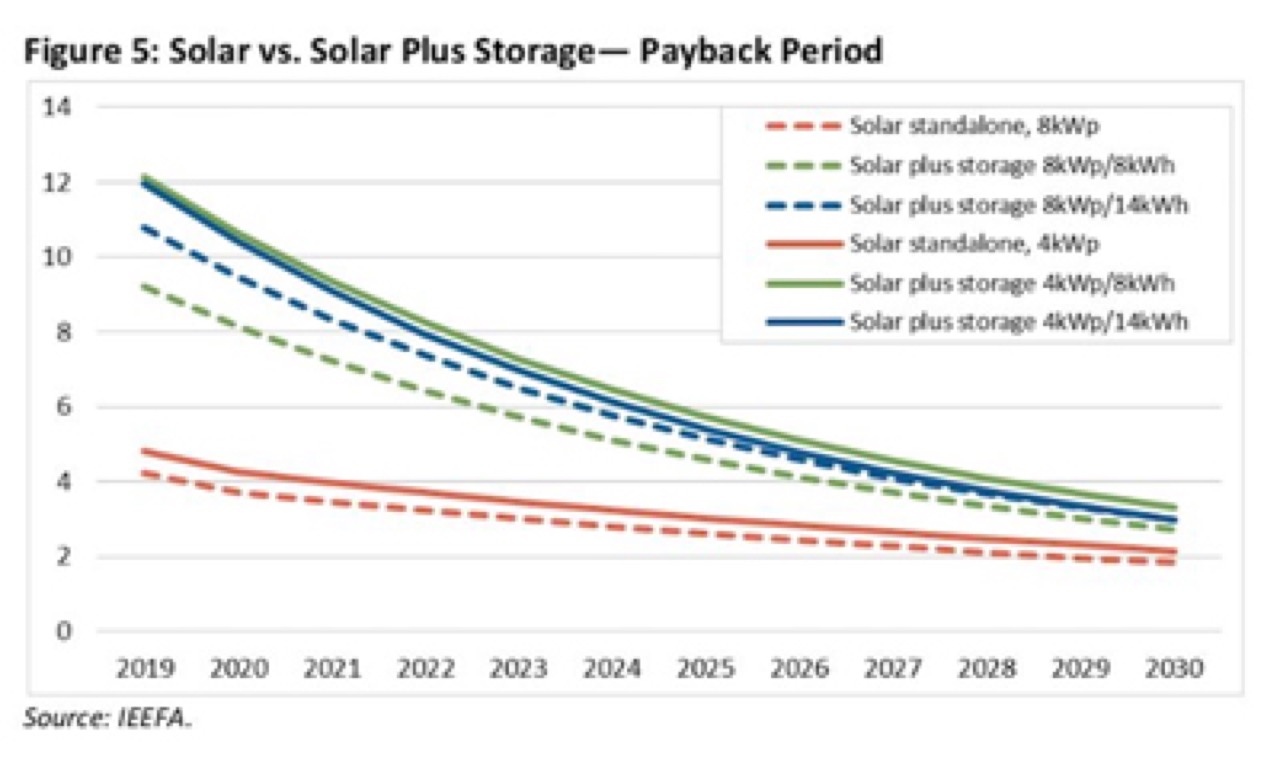 “Australia is leading the world in rooftop solar market share, and people are looking around for the next carbon-free innovation,” said one of the report’s author, IEEFA analyst Gerard Wynn.

“The beauty of electric vehicles is they can be charged by a household’s rooftop solar plus battery, with savings generated by on-site power generation and from avoiding the cost of constantly fuelling a conventional car.

“When the government introduces the right mix of incentives, people in Australia will benefit from cheap, solar-powered charging for their vehicles sooner,” says Wynn.

“Electric vehicles are cleaner, quieter, and less carbon-emitting than conventional cars,” he added.

“With rooftop solar being installed at faster rates per capita than anywhere in the world, Australia has a big opportunity to jump on the bandwagon and reduce everyday bills for Australians even further, while kicking climate goals.”

Original Article: Sophie Vorrath is editor of One Step Off The Grid and deputy editor of its sister site, Renew Economy. Sophie has been writing about clean energy for more than a decade.

Ethical and sustainable activewear to keep you moving

From the gym to Pilates to school drop-offs and coffee with friends, activewear is everywhere. …

The lawn may not be growing as fast as in summer, but make the most of grass clippings by using as …

With self-sufficiency becoming the new norm, it’s no surprise that chickens are popping up in …